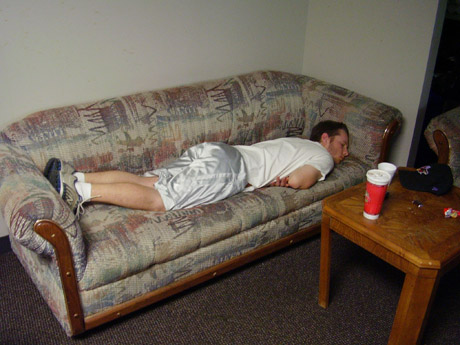 If you have a spot on the couch left, better help your fellow drunks out in their time of need.

Every true drinker may find himself in the situation where he doesn’t have a place to sleep at the end of a productive night. This can be for various reasons. You can’t remember the way back to the hotel, you lost your friend and your cellphone is off or you failed to pick up a girl that wanted to take you home. Anyway, these are the moments you may wake up in some unexpected places. In these cases good karma is essential. Therefor it is important to always open the door to drunks yourself.

As you might remember from the post Waking up strange yours truly has had his share of weird awakenings. The best story was definitely the time in the elderly home. But it wasn’t the only time the cops functioned as an alarm clock. Last time was last summer, when I forgot the name of my hostel in Prague and the Czech police found me on a bench in some a park there. Actually they were quite friendly, although I also have no complains about the Dutch police in this matter. But let’s be honest. It’s not the optimal way to start your day.

Many more times I woke up at somebody’s couch. Usually in student homes and such. Most recent occasion was about a month ago. After partying in a student disco I had no place to sleep and the bus to my hometown didn’t went for several hours. It was still rather cold outside, so I decided to go to the top floor of a student flat and sleep a little in the stairways. Soon enough I got discovered by an Egyptian exchange student who asked me if I wanted to come inside. In the kitchen we had a chat and he gave me some beers. After a while he left, but I could have more beers and crash on the couch if I wanted. Yes, that’s what I call a sweet deal.

Well most people will probably praise his hospitality, but are not likely to do the same with a random stranger. Well, if you have experienced this a couple of times like myself, you should understand that it’s only normal to return the favor once in a while. Drunk people are usually no serial killers or rapists, they are drunk. So invite them in, have a chat and if they’re not too weird lay them down somewhere. I had my share of weird guests in the past. Including some people that were probably best labeled as ‘questionable’. But none of them ever robbed me of anything.

However even if you are not in the position to open your own doors to a drunk, you should still try to help them. My best story in this matter dates from 2 years back. Together with a friend I celebrated my birthday with some major barhopping. Somewhere on the way we picked up a Polish guy that just moved to Holland. He joined our drinking and we took him to a club, our final destination. After some time the bouncer of the club came to me and said that ‘my friend’ was laying in a ditch outside.

I went outside and found the Polish guy laying in the ditch, almost in the water. I pulled him out and asked him where he lived. He forgot the address, the way, basically everything. Since it was my birthday and I had no intention of cutting the night short I decided to call on my friend who lived right across the street. We already laid down one drunk friend in his kitchen and he himself also called it a night. I was pretty sure he wouldn’t open the door for a random drunk stranger. So I had to come up with a trick.

I said I met a Polish girl that was so drunk she didn’t know where she lived anymore. Now these three words ‘drunk Polish girl’ didn’t miss their goal. My friend on the phone lost his sleepiness immediately. It must have been kind of a shock for him when I showed up with someone that looked very little like the hot Eastern European chick that he pictured, but it was too late to deny hospitality. The Polish guy was given a couch too, causing a second shock later that morning. Our friend that passed out earlier that night woke up next to a complete stranger and wondered in panic what he did the night before.

So there you have it. Everyone had a good night. At least four people have a nice story to tell and hopefully the Polish guy will remember the hospitality of my friend and do the same for others in the future. Think about that when you find a drunk dude close to your place in the future. And remember that could be you next time.

You want to read more true drunk stories? Check out our collection.

4 thoughts on “Karma is real, so open your door to drunks”